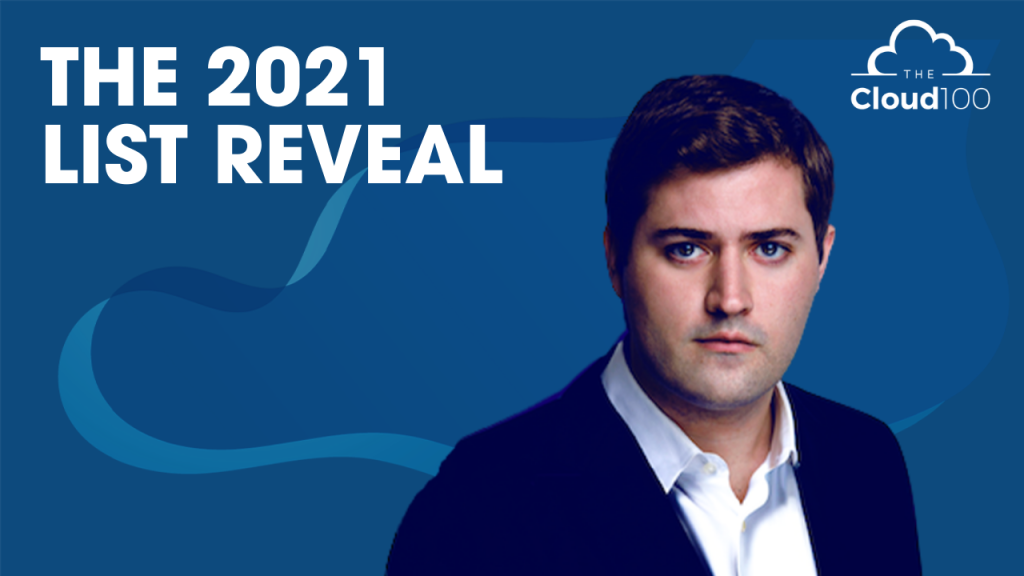 Alex Konrad, Senior Editor of Forbes, walks us through the highlights of the 2021 Cloud 100; the top 10, the newcomers, the biggest jumps, and what the list reveals about the industry.

E-commerce’s recent growth of more than 13% from pre-pandemic levels helps boost Attentive and Klaviyo into the top 20. As brands look for new ways to market to buyers online. The top 20 also see some new faces due to a record number of companies that graduated off the list since last year. 19 and counting, including names such as Snowflake, UiPath, Procore, WalkMe, Auth0, Segment, and many more.

The top 20’s biggest movers are Talkdesk, which moved up 36 places to number 17, and design tool, Figma, which moved 22 spots, and now sits at number seven. Check out our Cloud 100 package on forbes.com for much more on Figma and CEO, Dylan Field. The list’s biggest movers overall revenue intelligence provider, Gong, leaped up 43 positions to number 28. Amplitude and product intelligence, and Highspot and sales enablement, both jumped 52 slots to numbers 37 and 46 respectively. And LaunchDarkly jumped 53 slots, all the way up from last year’s number 100. Check out our cloud 100 package for more on that dev-ops business led by CEO, Edith Harbaugh.

Now, let’s talk more about the top 10, the cloud’s private company leaders. Number 10, Freshworks, customer support software business, Freshworks, is valued at $10 billion based in the Bay Area. Nine, Checkout.com. London founded Checkout.com provides online payment solutions that improve a user’s checkout experience. It’s one of Europe’s most valuable start-ups. Eight, ServiceTitan, the software platform for tradespeople cracks the top 10 after raising $200 million at an $8 billion valuation two months ago. Seven, Figma, led by CEO, Dylan Field, design software business, Figma, recently launched a punny brainstorming product FigJam, and reached a $10 billion valuation. Six, Plaid. It looks like FinTech startup Plaid would be off these lists moving forward when it agreed to be acquired by Visa in January 2020. But with that deal off the books, the open banking company is now flying high with a valuation north of $13 billion.

Five, Toast. Despite a trying year for restaurants, Boston-based, Toast, held on to its number five slot as business has bounced back for its hospitality software. Four, HashiCorp. Forbes 30 under 30 alumni, Mitchell Hashimoto and Armon Dadgar, maintain their number four slot from last year. But CEO, Dave McJannet, now calls the shots at the open-source Cloud infrastructure business. Three, Canva. Led by Melanie Perkins, Canva moves up to number three on the list. As its design software spreads across the globe from Australian roots. Two, Databricks. Based in the Bay Area, Databricks software for AI tools has gone from the UC Berkeley project to a $28 billion valuation. Number one, Stripe. After falling all the way to number two last year, Stripe is back at the top of the Cloud 100 list. That makes it five of six years at number one for the payments company founded by the Collison brothers and valued at $95 billion.

These ranks get tougher to reach and remain in every year. So it’s quite an achievement for any company on the Cloud 100 lists to breakthrough. Our rising stars list of up-and-comers, which have raised less than $25 million in funding, also gets more and more competitive. To see that full Cloud 100 list, this year’s 20 rising star companies, and much more coverage, be sure to join us at Forbes.com/cloud100. Check out our interactive lander for more info on the complete list, breakdowns by categories, stories about new and notable list makers, and much more.

And be sure to join me later in today’s programming, when I talk to Kelvin Beachum, NFL offensive tackle and cloud investor. Sevetri Wilson, founder and CEO of Resilia and Danielle Cohen-Shohet, co-founder and CEO of GlossGenius. We discuss the challenges up and coming entrepreneurs are facing, how they’re doing things differently and their advice for other founders building Cloud businesses today. Congratulations to all our list makers and enjoy the rest of your Cloud 100 event.

Daring leaders build creative solutions from their bold visions, despite sometimes not knowing what the future holds. However, innovation is often an imperative and not a luxury. After a paradigm-shifting period, people across industries and the entire globe are living and building in a brave new world.

Across the cloud ecosystem, product leaders are constantly considering what customers need now and in the future. But how exactly do companies harness user insights to build top-tier products? From GTM strategies to weaving in feedback to drive product innovation, Ali Ghodsi, CEO of Databricks, Amit Bendov, CEO of Gong.io, and Neha Narkhede, Co-Founder of