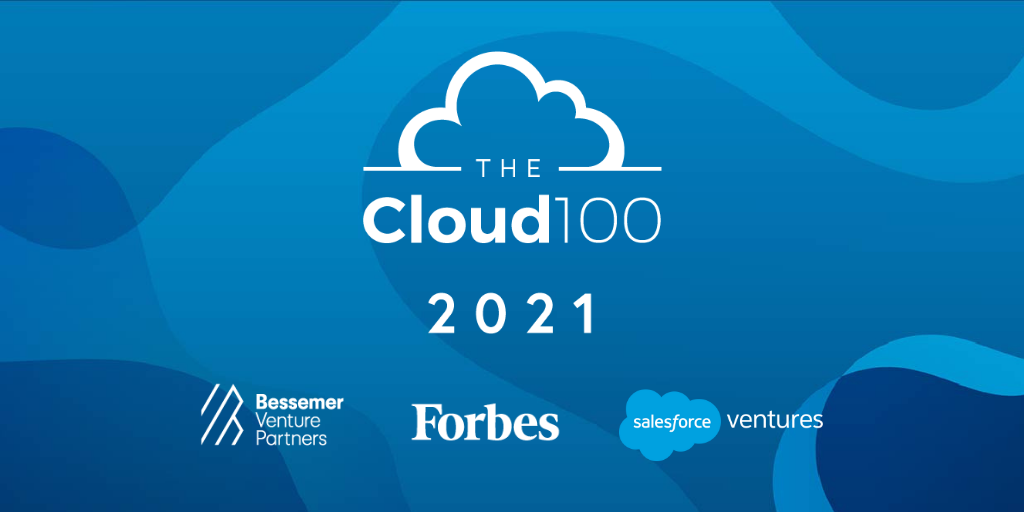 We believe this is just the beginning. We’re about to enter a new period of business creation we’re calling The Great Reimagining.

Over the past 18 months, the total market cap of publicly traded cloud companies has soared from $1 trillion to $2.3 trillion, representing the fastest growth in the history of the cloud. Private cloud company valuations have been on a similar trajectory: every company on the 2021 Cloud 100 list carries a valuation of at least $1 billion, with an average valuation of $5.2 billion. This represents 420% growth from 2016. The total value of the 2021 list is a staggering $518 billion — nearly double last year’s level.

Business leaders around the world are questioning everything they thought they knew and using this new understanding to reshape their strategies for success going forward. Customers’ needs and habits are evolving. Employees’ roles, attitudes, and workplaces are shifting. So are cities, suburbs, and real estate. Manufacturing, logistics, and shipping. School, childcare, and parenting. Transportation and travel. Entertainment, restaurants, and events. Financial services and banking. It’s hard to think of a single industry or activity that isn’t undergoing a major transformation.

As the world changes around us, technology is making it possible for us to respond quickly and change along with it — an urgent need for those who want to come out of this period victorious. As we examine this year’s Cloud 100 we see that the companies who made the list succeeded by helping organizations become more agile and resilient and in some cases, by rewriting the old rules of business.

Here is our take on the key themes driving this year’s Cloud 100:

As the cloud becomes global, Silicon Valley is becoming a construct

Not too long ago, venture capitalists on Sand Hill Road mused that they would not invest in any startup that was more than an hour’s drive away. But more and more technology companies are finding success in every corner of the globe.

After spending the last decade investing in tech companies across over 20 countries, I’ve witnessed this global acceleration firsthand. The data backs up this trend: venture funding to startups in Europe reached an unprecedented $59 billion and the share of VC funding dollars outside the US reached 52% in the first half of 2021. This year’s Cloud 100 included 38 honorees founded or based outside of the US, making this year’s list the most global group to date. Among them are BigID (Israel), Canva (Australia), Cloudinary (Israel), CultureAmp (Australia), Miro (Netherlands), OwnBackup (Israel), and Talkdesk (Portugal). For the first time ever, two Chinese companies also made the list: Fanruan and Jushuitan.

Why now? Unlike localized consumer businesses such as, say, food delivery, the cloud knows no borders. It’s just as easy to deliver cloud solutions to a customer next door as it is to deliver to a customer a continent away. Enterprises around the world have relatively similar needs and problems, and entrepreneurs from Australia to the UK have discovered that the usefulness of their products easily translates.

Moreover, companies have found large, diverse talent pools of engineers across multiple regions in the world, often starting with where the startup was founded. This has led to development hubs, as well as distributed teams that are remote. Virtual event startup Hopin, for example, was founded just two years ago in the UK; the company now has 800 employees around the globe that are remote-first. Importantly, companies outside Silicon Valley have seen stronger retention rates for top technical talent.

The pandemic further accelerated this trend with VCs investing in founders they’ve never met in person, reducing the barriers of physical proximity even more. The playing field has been leveled. Now, we see a flywheel in motion as the ecosystem, talent, and funding are in place across an increasing number of geographies across the world.

In the old rules of software, you would hire a large enterprise sales team that would sell your product to customers top-down. But modern software companies know that bottoms-up growth is a powerful way to scale, and that community is not just an afterthought — it’s a strategic advantage, both for developers and customers. We’ve seen IT budgets now extend far beyond CIOs to also include lines of business and developers.

Two critical interrelated trends have emerged: the importance of cultivating a community around your company and product; and product-led growth.

Cloud 100 companies such as Automattic, Databricks, DataRobot, Hashicorp, Postman, and Snyk have demonstrated the power of nurturing and investing in their communities as a means of driving greater adoption. With the rise of open-source software in parallel, companies are looking to ship product with greater agility and speed than ever. These developer communities have become the foundation of category-defining companies.

We’ve also seen just how quickly growth can happen when companies adopt a product-led growth model, as evidenced by companies such as Contentful, Canva, Figma, Gong, Highspot, Hopin, Pendo, and Zapier. The North Star for these businesses is not just about landing a new customer; it’s about optimizing the user experience, making it simple to deploy their software and actively engaging their passionate user base.

When we first started the Cloud 100 six years ago, there were only a handful of companies that adopted community and product-led growth as strategic vectors for growth. We now see how critically important this has become and expect to see an even greater number of cloud companies that will adopt this framework going forward.

Every software company can be a fintech company

Just a short while ago payments were dominated by a few behemoth players who seemed to be invincible. Banking regulations and incredibly steep barriers to entry made it nearly impossible to compete with financial institutions that controlled trillions of dollars. But a new API-led infrastructure has enabled entrants to invent novel business models.

The valuation of fintech companies on the Cloud 100 rose 461% since 2019, reaching $146 billion this year — more than a quarter of the value of the entire list. Part of that increase can be attributed to the pandemic: as shoppers moved online, e-commerce penetration in one quarter grew to 33%, representing the equivalent growth of the previous ten years combined.

Three of this year’s top ten Cloud 100 companies are pure fintech plays: Stripe, Plaid, and Checkout.com. Newer entrants, such as Airwallex, Flutterwave, and Razorpay are taking digital payments to the rest of the world, while companies such as Forter keep e-commerce payment transactions secure.

In addition to dedicated digital payment platforms, vertical SaaS companies are embedding fintech options into their products. Now customers of vertical solutions such as Procore, ServiceTitan, and Toast, can seamlessly process payments and payroll in their existing workflows. Restaurateurs, for example, can use Toast’s point of sale software to manage restaurant operations while also managing payroll for their cooks and waitstaff. These lines will continue to blur, and we expect to see more financial innovation in the cloud software ecosystem.

The new rules of software and business are still being written. We expect that next year’s Cloud 100 will teach us even more about the way the world will work in the future. Meanwhile, please join us in congratulating the current batch of billion-dollar cloud companies!

Daring leaders build creative solutions from their bold visions, despite sometimes not knowing what the future holds. However, innovation is often an imperative and not a luxury. After a paradigm-shifting period, people across industries and the entire globe are living and building in a brave new world.

Across the cloud ecosystem, product leaders are constantly considering what customers need now and in the future. But how exactly do companies harness user insights to build top-tier products? From GTM strategies to weaving in feedback to drive product innovation, Ali Ghodsi, CEO of Databricks, Amit Bendov, CEO of Gong.io, and Neha Narkhede, Co-Founder of